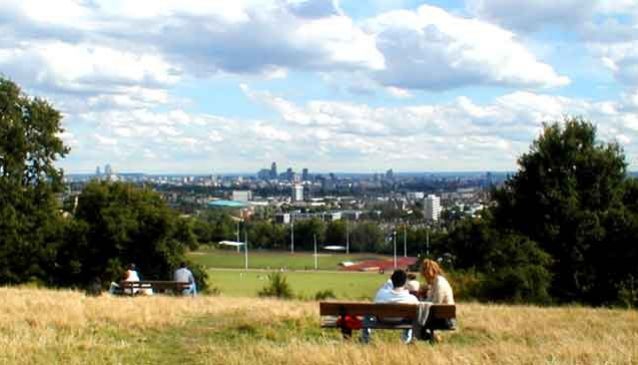 The beauty of Hampstead Heath, apart from the obvious being its vast expanse of glorious countryside, is its proximity to the rest of the city. It rises above the sprawl of London, where benches line ridges making for perfect opportunities to stop, sit, and gaze out at the now silent but still bustling London.

There are up to thirty ponds puddled around the area and, even though they may look natural, they're man-made thanks to the 300-year-old dams further up.

There are various areas that make up the entirety of Hampstead Heath. Golders Hill Park is one of them, and it is here that the animal sanctuary is situated. From here, you're allowed to approach deer and native birds. Kestrels and other birds of prey have been spotted around Hampstead Heath - there's even (to use the proper collective noun) a stand of flamingos - so bring some binoculars and a camera if you plan a visit. Next up, there's Kenwood in the northern reaches of the grounds. Here is where you'll find the seventeenth century neo-classical stately home, which is now under ownership of English Heritage.