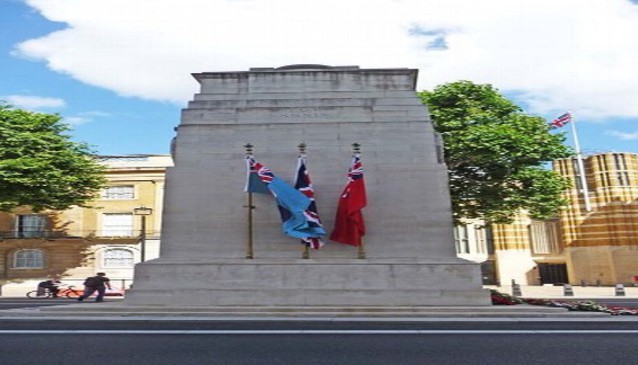 The Cenotaph in London's Westminster and Whitehall area is Britain's main and most important memorial site for those Commonwealth citizens who died during the two World Wars, and for conflicts which are still ongoing today. This cenotaph is probably also the most well- known of all cenotaphs throughout the world. However, cenotaphs and memorials to dead or lost soldiers or warriors have appeared in Europe, Egypt and Greece since ancient times.

The Whitehall Cenotaph was designed by Sir Edwin Lutyens, and built shortly after the First World War in 1919. The inscription on the sides of the Cenotaph, 'The Glorious Dead' were chosen by Rudyard Kipling. It is a very simple memorial, and usually has flags displayed alongside it.

Its importance is most noticeable around the events on Remembrance Day in November, when important politicians, military personnel and royalty (including the Queen) lay wreaths at the base of this Portland marble reminder of the brutalities and ultimate consequences of conflict throughout the world. A while before this day, people in the UK wear red poppies to raise money for military charities.

Ambulance workers and firemen also salute this memorial as they go past, as a sign of respect. When the Royal Horse Artillery driver of Diana, Princess of Wales's funeral carriage passed the Cenotaph on her funeral he saluted this memorial, and did not even salute the Queen.

To visit the Cenotaph is to visit an important symbol of understated respectful Britishness, and an important reminder of what has happened in the past.