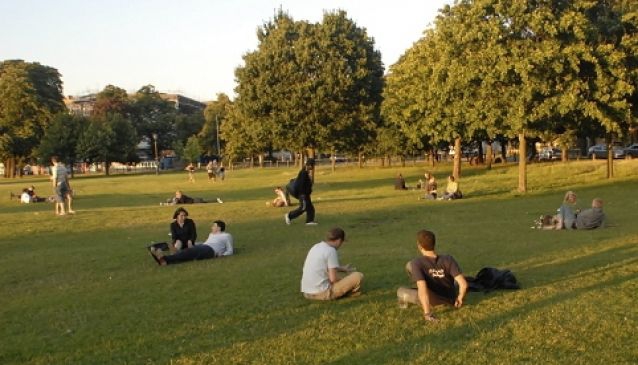 Clapham Common is a triangular park of 100 acres and boasts three large ponds that a popular fishing spots thanks to the carp and bream that populate their waters.

A popular one with Londoners thanks to its wide open fields, giving ample room for activity. During the sunnier days, you're likely to see plenty of individuals sprawled out on their backs, discarded shoes by their side.

Clapham Common has an unmistakable incline to it. The sort with such a gradual slope it'll tire you out without you even knowing it's there. When you reach the top, though, turn around and have a look. London, in all its glassy, sprawling stature spreads out before you. Clear views of the 'Gherkin', Canary Wharf and beyond are all for the taking. The sight really is a pleasant surprise for the first-time visitor to Clapham Common because of its unexpectedness.

There's a skatepark on the common which has been refurbished thanks to a fundraising committee. Its floor and ramps are all solid, smooth concrete melded into each other, with flat rails and stair grinds for all abilities.

Right in the center of the common, a 'hub' from where all the paths escalate, is the Clapham bandstand; it's thought to be the oldest and largest in Greater London, but actually it's a copy of an original. Either way, and has been there since the 1860s, and used to be used for twice-weekly concerts. Recently it was reformed to its former beauty, making for a great spot to sit and have a picnic.