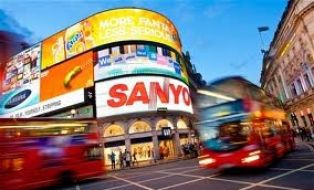 The West End is not geographically as vast as, say, Texas - but attempting to navigate it blind is, for the first timer, not exactly the greatest of ideas. Broadly you could think of it as incorporating Piccadilly Circus, Leicester Square and surrounding areas, Covent Garden, Soho and probably even Charing Cross, the Strand and Chinatown.

The West End is known primarily for entertainment - dining, drinking, shows, clubbing and shopping. Pretty much anything you could ever conceivably want to keep you entertained can be found here.

There are some excellent high street and high-end shopping options to be found on Regent Street, Oxford Circus and Covent Garden - from Burberry Prorsum to Zara - and a high concentration of comedy clubs and friendly bars around Leicester Square. Every night, both savvy locals and gregarious out-of-towners spill out of the tube station and black cabs and into the numerous restaurants, clubs and bars in the area, and is known as the primary nightlife hub of the city.

There are numerous options for entertainment - cinemas (pricey) abound around Leicester Square, home to the Odeon theatre and not coincidentally every UK film premiere takes place here. For kids, the Rainforest café and Trocadero have everything from parrots to video game arcades, there's a Ripley's Believe It Or Not! at Piccadilly circus and the HMV Gamerbase in Leicester Square is super popular with kids who can try the latest video games for just a few pounds.