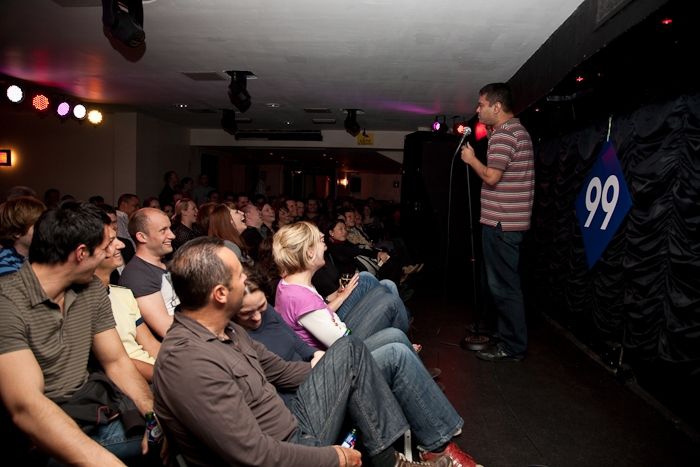 The 99 Comedy Club is open 7 days a week and 52 weeks a year to satisfy all your comedy cravings. Storm Nightclub, situated in Leicester Square, is the largest of the 99 Club chain. Other venues include Covent Garden, Islington, and Oxford Circus; but this is the original club, renowned for its reputation of being the best voted London comedy club in the 2011 and 2012 Chortle awards, so obviously they are doing something right. Despite being the largest of the London venues there is an intimate vibe, as a result of the low ceilings, and the shape of the room, making you feel close to the action at all times. An intimate atmosphere similar to watching an amateur band perform on a small stage is what you can expect here.

In terms of the cost, tickets will set you back a minimum of £15. Therefore, this is not an occasion which you have to save up for, but instead something you can attend on a spontaneous whim; which is ideal. Be brave and stretch your budget further to £25 and bag yourself a 2 course meal or a gourmet burger as part of an exclusive comedy package. Beverages will be expensive which might not come as a shock to you due to its tourist location in Leicester Square, so be prepared to fork out £4.50 for a bottle of beer. We recommend visiting a more affordable watering hole for a few drinks before the show commences.

The quality of the acts won't disappoint, world class comedians including Russell Howard, Lee Mack, Spephon K. Amos, Andy Parsons, Jason Manford, Rich Hall, and Lenny Henry have all performed special sets at the 99 Club. If you are still seeking more entertainment after the show you're in the perfect location to extend your night into the early hours.