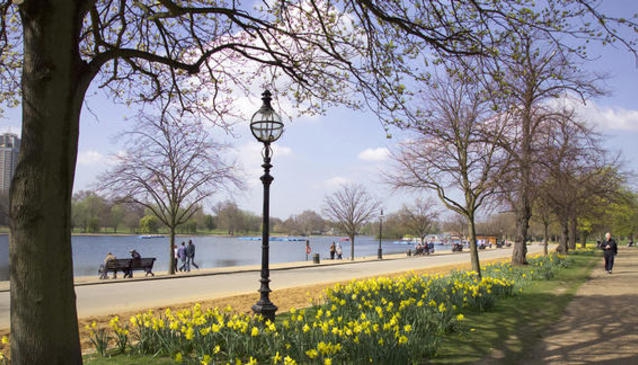 It's difficult to describe just how spectacular this massive green space right in the middle of Central London is; it's just a wonderful place for Londoners and tourists alike to relax and play.

The park's history dates back to the 16th century when Henry VIII bought the park from the monks of Westminster Abbey. The park remained private property, used mainly for hunting wild boar, until James I came to the throne and started offering limited access to the public. In 1637 the park was opened to the public by Charles I. Interestingly, during the Great Plague of 1665 many residents of London sought refuge from the disease by camping in the park.

Over the centuries Hyde Park has often been used for ceremonies and celebrations and to this day often hosts massive outdoor concerts. Recently it played host to the Nelson Mandela 90th birthday celebrations and the Live Aid charity rock concert.

Towards the southern section of the park is 'the sporty bit'. During the summer months many informal games of cricket, rounders, football and Frisbee are played. Rollerblading and skating are permitted on all the roads in the park and, of course, walking and jogging are especially popular. The Serpentine Lido is a fantastic place for swimming and the accompanying paddling pool is perfect for kids. It's the ideal place for a picnic on a hot summer's day.

Towards the western end of the sporty bit is Hyde Park's Tennis and Sports Centre. The tennis facilities are fantastic and varying membership options are available. For those that just want to turn up and play you will be welcomed too. There is also a bowling green available that can be hired on request.

On the north and south sides of the park there are designated horse riding routes. There is also a menage located next to the children's playground and is available to the customers of the local stables.