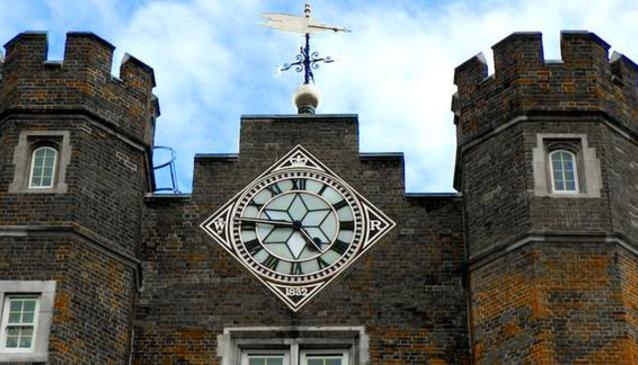 Built by Henry VIII mostly between 1531 and 1536, St. James's palace has been a residence of the British monarchy for over 300 years, and though everyone flocks to Buckingham Palace to catch a glimpse of her majesty, St. James's remains the official royal residence. Ambassadors are still accredited to the court of St James, though welcomes and afternoon tea is still subsequently held at Buckingham Palace.

The palace is still a busy working palace, hosting receptions for the plethora of charities the Royal family engage with (over 100, at last count), while the state apartments are frequently used during incoming state visits and other formal and ceremonial occasions. Crucially, the palace serves an important ceremonial function after the passing of a monarch - the Accession Council meets after the death and it is from here that a new monarch is proclaimed.

Of late, the palace is a former residence of HRH The Prince of Wales and his sons Princes William and Harry (although they have since moved to neighbouring Clarence House) and is now home to Princess Anne. Diana lived here until her divorce to Prince Charles in 2006.

The palace is closed to the public, but its central location at the end of Pall Mall makes it very convenient to pop one's head around the corner to have a look at the imposing gates and Tudor façade. The nearest tube stations are St. James's Park and Charing Cross.