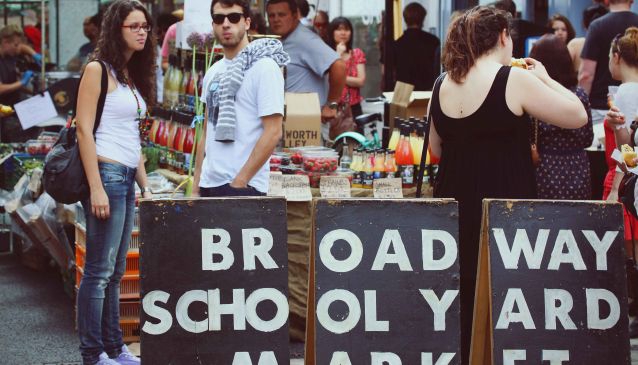 Broadway Market may just be London's best market. Described variously as the best of Spitalfields' crafts - we're talking vintage, pottery, antiques, eco-friendly goods - combined with the best of Borough's vast food selection and stalls, Broadway adds a dash of East End humour and charm and is altogether better organised, a community centre away from the chaos of the tourist and middle class playground feel that characterise many of the other markets.

The area around Broadway Market used to be en route to the slaughterhouses around Brick Lane, so consequently the area has inherited a great local food culture - East End butchers producing fine fresh and cured meats, cheeses and breads, this neighbourhood likes to eat well. Girls, fret not, as it's not just about great hunks of meat - there are plenty of stalls selling fresh and outrageously good baked goods. Just pick the place with the longest queue - if people are willing to queue for it, it's going to be good. The Vietnamese coffee stand is also a good bet, and look out for the lady selling the ridiculously overstuffed eclairs.

Alongside its excellent jewellery and second-hand threads, Broadway also offers stalls selling things you would only find in an artistic conglomeration like East London - rare books and out-of-print editions, back issues of anything from National Geographic to Vogue and, just to make sure there's absolutely no need to go anywhere else, some great stalls selling beautiful and cheap flowers. Prices here are considerably less than at other more well-known markets (!) and though it's harder to get to than the other markets, that's no bad thing given the mix of charm and quality other markets can't quite match. Just make sure you get here before midday though, as the hipsters and fashion kids turn the market into a catwalk and inevitably begin picking off the best of the goods. To have brunch at a nearby café followed by a stroll around the market on a Saturday morning is a beautiful thing.