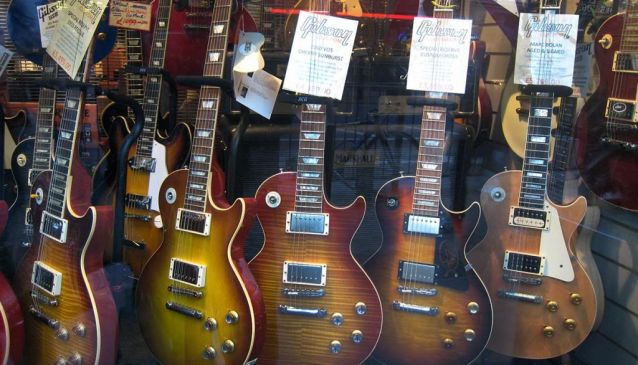 To most people passing through, Denmark Street is often referenced as 'the street with all the guitar shops on it'. However, to London musicians, it is a haven and will sate anyone looking for anything from sheet music to vintage instruments and to those in the know, some of the greatest musicians have played and recorded here. The Stones recorded their first album here; the Beatles bought guitars here and Hendrix recorded in the basements beneath the shops. The Sex Pistols used to live above number 6, and Elton John wrote 'Your Song' on this street. For sheer history per square metre, it's hard to beat.

The bulk of the shops on Denmark Street specialise in guitars and basses. Most guitar shops will sell basses and have a pretty good selection, though you can find a bass-only extravaganza at the Bass Cellar. As for guitars, the selection is pretty representative of the market - a lot of classic and mainstream brands like Fender and Gibson can be found in most stores, Joe Macari's probably has the best customer service and most esoteric (read: fun) collection of instruments, while Vintage & Rare and Hank's Guitar Shop will fix you up for vintage. Rockers is the best for modern rock guitars and has a very good collection of popular modern brands like Charvel, ESP, BC Rich and rare Ibanezes.

For drummers, the Drum Studio is always reliable and anyone looking for an instrument repair service would not go far wrong - there's a guy downstairs in Rockers who has personally fixed our guitars in the past, though most music shops will have their own go-tos. Finally, there's a rehearsal space and tattoo parlour through Tin Pan Alley (an alley on the north side of the street) and a great watering hole in the Twelve Bar Club. Keep an eye out for the odd muso - Pete Doherty has played at the Twelve Bar in the past and we've seen everyone from Noel Gallagher to Yngwie Malmsteen on Denmark Street.