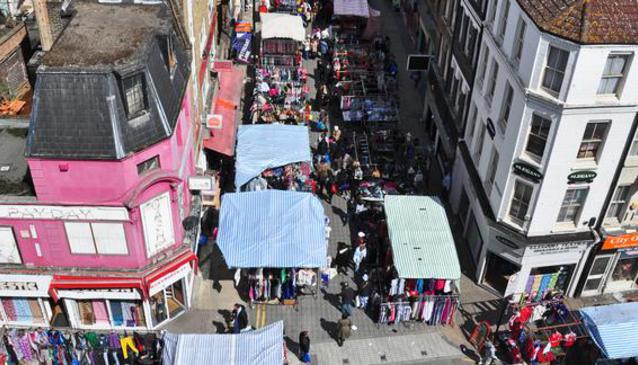 In the heart of the East End, nestled between Wentworth and Middlesex streets, you will find the famous Petticoat Lane Sunday Market. Do not bother to look for a street by this name as the market was originally named after the petticoats and lace once sold there by the Huguenots who came to London from France. The street was renamed Middlesex Street in 1830 during the reign of Queen Victoria, as the Victorians wanted to avoid any reference to women’s underwear! Unfortunately for the Victorians, the name has stuck and is still used today.

The market’s wares consist mainly of clothes for men, women and children, from street-cred clubwear, to over-orders of designer clothes and last year’s must-haves. One of its main specialties, leather goods, can be found at the Aldgate East end of the market. There are of course all the other usual items you would expect to see at a street market, ranging from running shoes to kitchen utensils and other bits and pieces too. With more than a 1000 stalls lining the streets, bargain hunters come from all around London to look for a deal. So, even if you’re not in the mood to shop, it’s definitely worth a visit just to experience this hub of bargain hunting bartering. The market is open on Sundays from 9am to 2pm, with a smaller market open on Wentworth Street from Monday to Friday.

Petticoat Lane may not be as stylish as its neighbor, Spitalfields, but it is a bargain hunters

paradise and one of the best East London experiences around.