A Look at Islington's Fringe and Theatre Pubs

The plays had to be short...with plenty of comedic symbolism to win the attention of their audience.

Islington has always been a theatrical Entertainment quarter, though the tourists and even many Londoners didn’t appreciate it until it went through a revival in the 1970s. We are quite a way ‘off-West End’ up here in Islington, but its dramatic credentials are of the highest calibre. Shakespeare’s ‘The Theatre’ in Shoreditch is actually the first recorded dramatic venue in London, which was later carted across the river to Southwark to be reinvented as The Globe in order to evade the high tax rate on entertainment establishments.  So, the theatrical roots run deep and true here. North East London maintains a very experimental fringe theatre circuit, and it all started in the staple of London life, the public house.

Already home to a hundreds of dramas poured into thousands of flagons of ale, the inns that lined Upper Street were the perfect place to establish a fledgling industry, cheaply and quickly. To escape the huge taxes levied by Westminster, the theatre could be moved beams and all to the seedy Southbank, or the players could set up shop in a pub, patently a drinking hole first and foremost, not a performance venue.

Setting the trend, there was usually a heavier emphasis on drinking, which would support the establishment’s enterprise better than the plays, as playing remained a peripheral activity frowned on by the church and state. After the Middle Ages, its plots were secular or dabbled in pagan and ancient belief systems, and were therefore deeply subversive. Still, history plays that depicted the epic battles of old and the hubris of kings were in high demand in the courts. The pubs of Islington spoke a more accessible dramatic language. 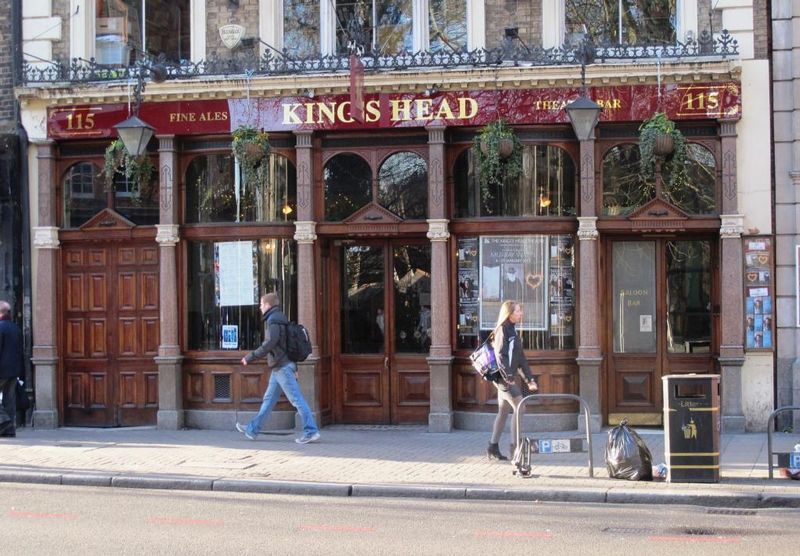 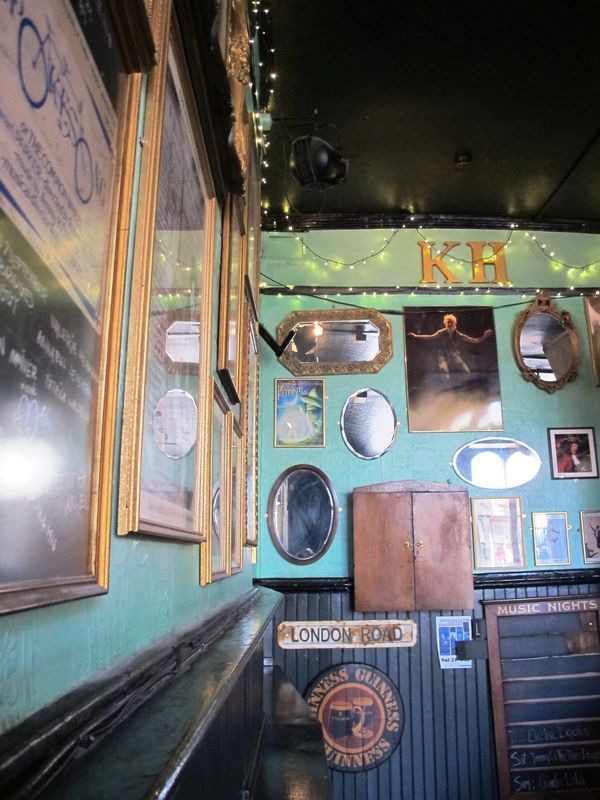 There were fifty pubs on Islington Upper Street in the 17th Century, a raucous working class entertainment and nightlife district, similar in purpose (if not quite clientele) as the contemporary Upper Street. When inns opened their doors to players, it helped to settle them and build a theatrical district, where it had previously been only a rootless profession of travellers. Inns already had the perfect stage space; flat open courtyards with surrounding galleries. These galleries were already full of a willing and, shall we say, ‘responsive’ audience of drinkers. The plays had to be short and easy to stage with plenty of comedic symbolism to win the attention of their audience. They were often derived from common mythical plots from antiquity, Anglicised and pared down for the stage with no set or lighting. There were no women actors at all, the female parts being played by young boys in drag.

The limitations of the small stage remain in the modern theatre pub, though this intimacy is more often seen as a benefit to be exploited not a hindrance, and of course women are allowed to perform. Islington’s Music Halls came into fashion in the 19th century, and indulged in a visceral and close attachment to the performance, but the earliest and most prestigious of which being Saddlers Wells which has been on the same site in Clerkenwell since 1683. Saddlers was ostensibly a monastic spring of natural healing waters, but also hosted a wealth of musical and dance performances that was the real draw to a well-heeled clientele. Currently in its fifth reincarnation, Saddlers Wells is a now a democratic ballet house for the masses, not the elite. Its tap water is unlikely to cure ailments, however.

If you look beyond the Jack Wills and Starbucks, today’s Islington is buzzing with the same theatrical fervour as yesteryear. This is theatre as a local affair with new and exciting names with all the immediacy of the stage that started the whole scene. Here’s a closer look at two of N1’s most iconic establishments. 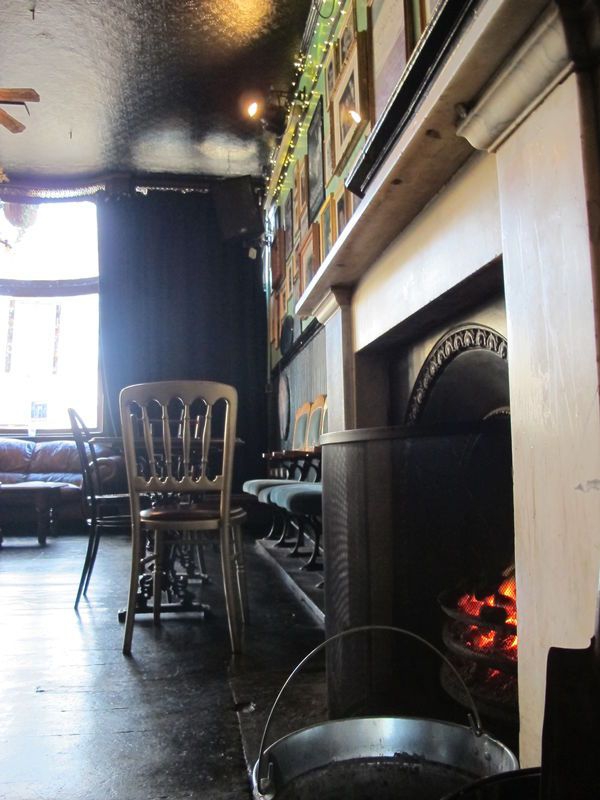 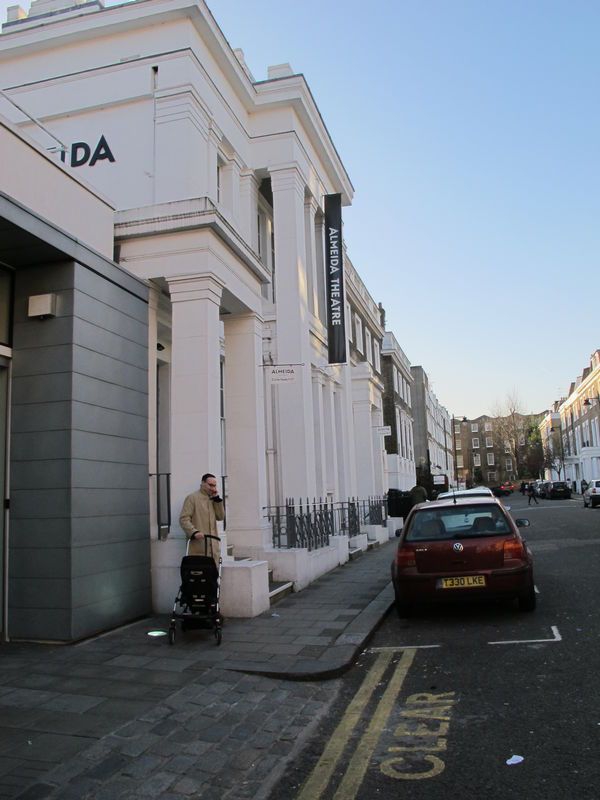 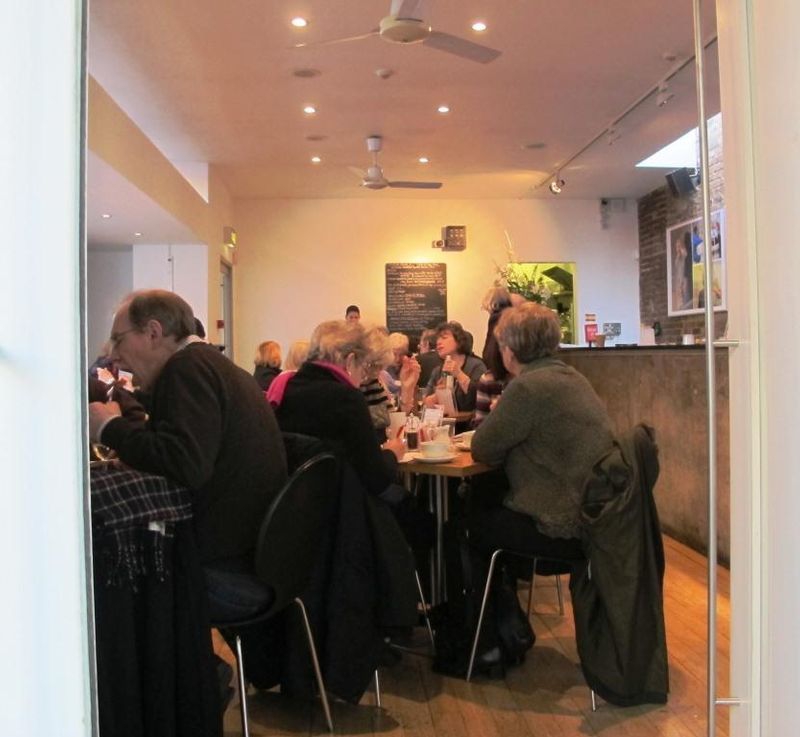 Barbara Windsor can and has been seen teetering around the historic theatre The King’s Head pub on Upper Street. Join her for a tipple in the bar then head to the stage and tiny 115 seat auditorium and settle into the King’s Head Theatre’s full and varied roster of acts. You can see some boutique theatre pub opera, or a touring comic or two on most nights of the week. It’s well established thanks to its royal qualifications (allegedly Henry VIII’s favourite place to stop off for a mead on the way to see his mistress) and its staggering age; there has been a pub on this site for five hundred years, though the stage has been running since 1970. In its current garb, it enjoys much support and praise from the British stage glitterati, many of whom had their first gigs here, including Alan Rickman, Richard E. Grant and Victoria Wood.

This year closed with the residency of OperaUpClose, making full use of the intimate venue to convey the full power of operatic singing.

The Almeida is touchstone for any London acting career, and often attracts bigger names than its small stage would suggest. This 325 seat theatre underwent a multimillion pound refurbishment in recent years, to give its exterior and bar area a chic facelift but more importantly to maintain its high quality staging which is synonymous with its name in thespian circles.

The intimate space is engaging and the fourth wall is definitely a low one here, as the actors seem to relish this simple and minimalist space. This is English drama at its purist, trimmed of the flabby West End faux-glamour.

This season sees gritty kitchen-sink dramatist Neil LaBute bring his third play to the Almeida that delves into the nuts and bolts of relationships and our preoccupation with physical appearance Reasons To Be Pretty.

So, when you sip your beer in one of these fine establishments, know that you’re drinking in some heady London theatrical history. The boards have been crept by some esteemed company, but a more intimate connection can be found in your beer glass that must might have been used by Babs herself.