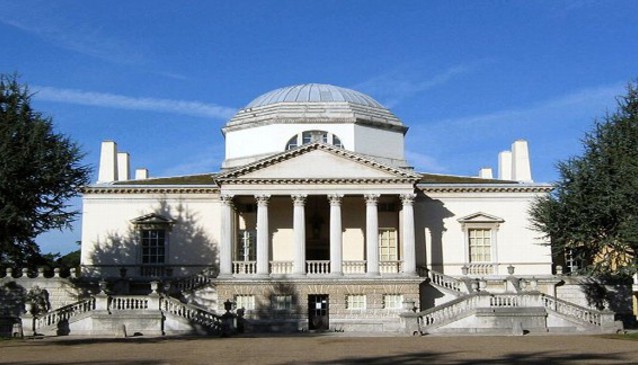 This romantic 18th century villa with vast gardens is built around classic Italian themes . Chiswick House is a grand house in miniature designed by Richard Boyle, the foremost architect of his time and who wanted to create houses and gardens that might have been found near ancient Rome.

Visitors today are often surprised to find out that there is little furniture in the house. The ground floor is plainly furnished and houses an introductory film and an exhibition. The grand rooms are reserved for the first floor, in the centre of which is an octagonal room with a lavish domed ceiling called the tribune or saloon. This designed to be a social and recreational space. The most lavish (and perhaps tacky) are the Green, Red and Blue Velvet rooms with their velvet wallpaper- some have even compared these rooms' opulence with the inside of Faberge eggs!

The grounds themselves are historically important too- it was here that the 'natural style' of gardening (something typically English, apparently) was thought up. Here you will find a canal/ lake and a series of walkways leading up to these classical buildings. Later, it was decided to try and create a romantic, horticultural world- and which now surrounds plenty of statues, bridges, temples and water features. There is even a tomb dedicated to a pet dog named Lilly!

So while it may be a bit of a mish-mash of styles in a pretty strange place, a visit to Chiswick House is a good way to spend a sunny summer day, or to escape the concrete jungle further into town.