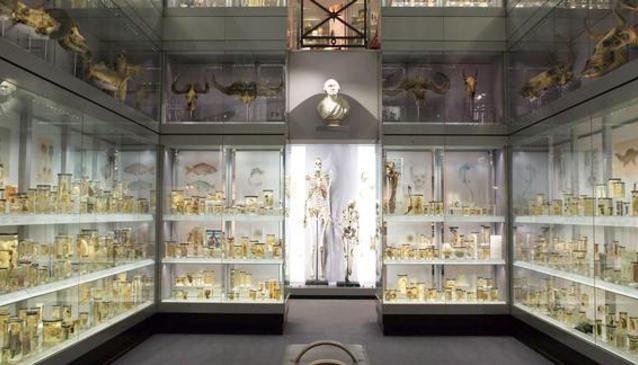 Housed at the Royal College of Surgeons in the Holborn area of London, the Hunterian Museum is inspired by the life, work and specimen collections of the surgeon John Hunter during the eighteenth century. His huge collection of medical specimens was purchased by the government in 1799 and the Museum of the Royal College of Surgeons was opened in 1813, near Holborn Underground station.

Despite changing in appearance and purpose as a result of the world wars and changes in medical science, the Hunterian Museum is still a fascinating modern museum full of glass cabinets containing over 3, 000 specimen jars, complete skeletons, bones, skulls and teeth; dried preparations, corrosion casts and wax teaching models. It is a fascinating mix of comparative anatomy and pathology specimens, and combines historical surgical and dental instruments together with modern surgical instruments and technologies.

The collections include paintings, drawings and sculpture. Some of the most well- known exhibits include Winston Churchill’s dentures, and half of mathematician Charles Babbage’s brain. Some of the material may not be suitable for younger children, and maybe even some squeamish adults. In fact, some of the exhibits are grotesquely fascinating, to say the least.

The Museum certainly is quirky, and might not be everyone’s cup of tea, but it is definitely an interesting look at the vast developments made in medical practice, surgical instruments, and how the human body is seen and treated by doctors, right from the eighteenth century. The museum was overhauled recently, and now also includes a very honest display on plastic surgery techniques, complete with examples.