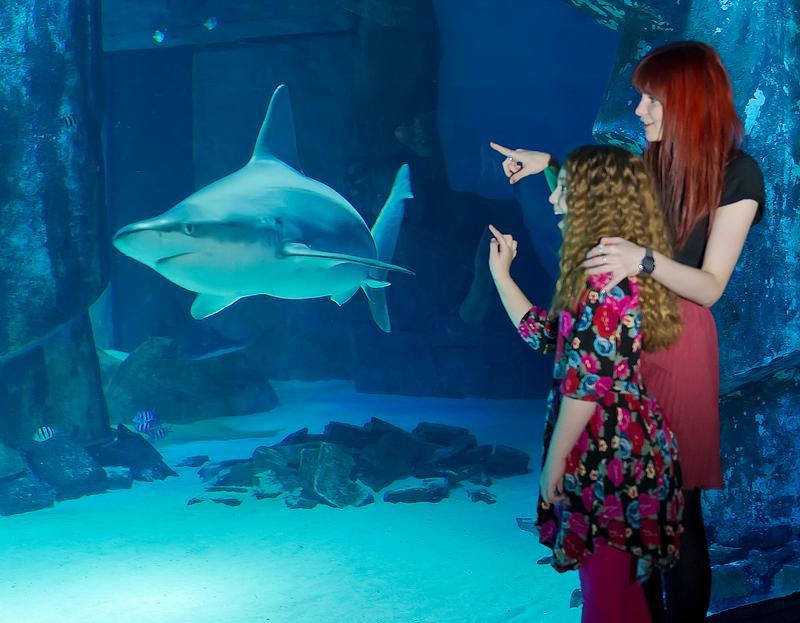 The Sea Life London Aquarium is Europe's largest with 500+ species of marine life housed in more than 2million litres of water - you wouldn't want this place to leak!

At London's aquarium, they really wanted to make guests feel as if they were travelling through different areas of the world rather than ambling around a big metal warehouse - well, they succeeded. You'll think you're somewhere else after five minutes. There are 14 themed areas within the aquarium spread over three floors (Arctic, jungle, oceans etc.), each one containing its respective wildlife all beautifully encased in glass tanks or open-top tubs.

One of the newer and more outstanding features of the Sea Life Aquarium is the Shark Reef Encounter. A five metre long transparent walkway allows you to walk directly over the shark tank - look down to see a total of 16 sharks (including a couple of brown sharks and a bunch of black-tipped reef sharks) swim silently beneath you, like ghosts looking for someone to haunt.

Other notable creatures include a group of Gentoo penguins. They're from Antarctica and are distinctive thanks to the white stripe across their head and a blazing orange beak. You can watch the Gentoos jump and slide around their ice cave and in their freezing cold pool, hear a joke from the clown fish, marvel at the ferocity of the three-meter-long sand shark or be tickled by the slimy tentacles of the resident octopus. Did you know an octopus can squeeze through a gap the size of a £1 coin?

Sea Life London Aquarium is an attraction sure to win the attention of children. So, if you need a way to wear out your energetic kids, treat them to a trip with their friends or, if they've been an irritation of late and you want to feed them to some hungry sharks, you know where to bring them - no-one will leave disappointed or dissatisfied, least of all the sharks (potentially).

Right next to the London Eye and across from Westminster Bridge and Big Ben.