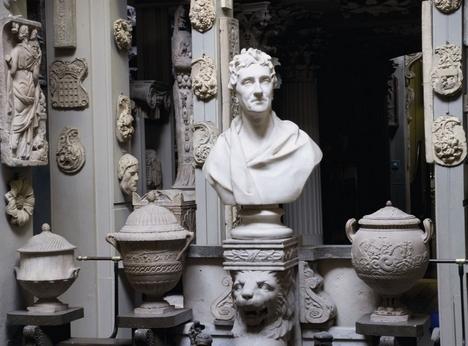 Sir John Soane's Museum in Holborn was designed by one of Britain's greatest architects, Sir John Soane, and was his home as well as his private collection of curiosities. Inside, visitors are able to sneak a peak into one of London's most unexpected and unusual interiors. Every item, colour and decoration reflects its creator's architectural ingenuity, imagination and love of beauty.

Soane's collections are still on display today as they were at the time of his death in 1837. The house, museum and library at No. 13 Lincoln's Inn Fields has been a public museum since the early 19th century, and like many other London museums, admission is free.

The son of a bricklayer, he later became a Professor of Architecture at the Royal Academy and wanted to turn his house into an accessible and beautiful collection that would appeal to his students and give them the benefit of easy access to these weird and wonderful pieces. He would constantly rearrange artifacts and pieces of art within the house and group them in themes.

Each of the rooms in the house has a certain quirkiness to it- whether it is the Picture Gallery which has large folding panels as walls, or the the Monument Court and Monk's Yard which contain an array of architectural fragments, Classical in the Monument Court with its central column or 'pasticcio' representing Architecture and Gothic in the Monk's Yard, filled with medieval stonework from the Palace of Westminster.

The collections themselves include architectural fragments, Roman and Greek marbles, casts, paintings, sculpture and furniture. There are works by anonymous artists and craftspeople, as well as works by more established people such as Flaxman, Canelletto and Turner.

While some might feel that visiting this comparatively small museum is like visiting an antique shop, there are wonders around every corner, and beauty everywhere you look.