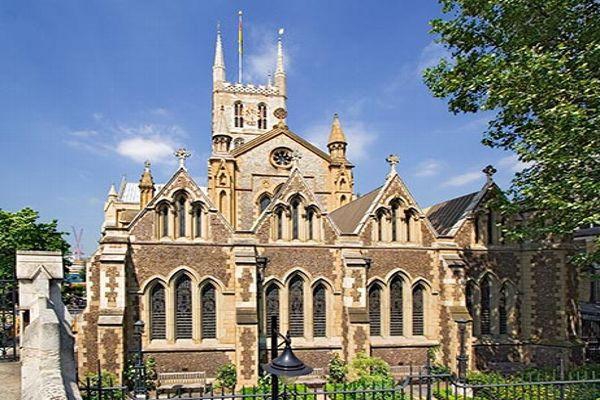 Although parts of this glorious cathedral, in London's Southwark area, date back over 800 years, it only became a cathedral in 1905. Southwark is at the oldest crossing point of the tidal Thames, and used to be the only entrance point to the City in ancient times. There has been a church on this site since AD 606, so it is more than a church- it is a notable piece of London history. Southwark Cathedral is the oldest cathedral building in London, and even the Romans used it as a site of pagan worship during their occupation.

Several trials and executions of Protestant martyrs occurred here during the reign of Mary Tudor, but after the Reformation, parts of the Church were used as a pigsty.

As a visitor to Southwark Cathedral you are able to see memorials to Shakespeare, as well as stained- glass windows with images of author and semi- revolutionary Chaucer. In fact, all types of people have found political and social refuge on this site- from princes to paupers and prisoners to patients. The Cathedral has also had quite a close relationship with activists, such as Mandela who recently opened a new section of the Cathedral, and various political movements around the world.

Southwark Cathedral has won a number of awards for architectural innovation, and as part of the Millennial developments, an interactive museum called the Long View of London was devised and implemented here.

Its location also means that it can be visited as part of a visit to the South Bank area, and as part of a trip to one of the most culturally enriching parts of London.