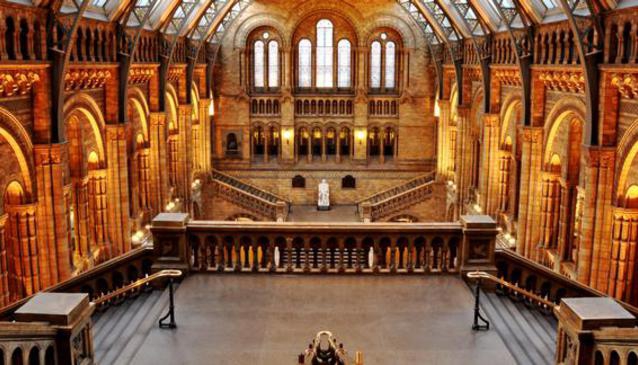 For parents, The Natural History Museum is a brilliant place to bring inquisitive children. The entire museum has a gentle, quiet atmosphere, allowing thirsty brains to absorb every informative square inch.

Step through the front door and you're immediately greeted by the skeleton of Diplodocus, a Jurassic herbivore with a ridiculously long neck and a powerful tail. The distance from the last and tiniest bone in its tail to the small, flat-headed skull is a marvel in itself. In the museum there's an entire zone dedicated to dinosaurs: the Blue Zone. More skeletons await, as do models (we promise, they are only models) which move and roar while captivated (and some terrified) audiences watch on. Other zones include the Green Zone (ecology); the Red Zone (earth's history and creation); and the Orange Zone (wildlife and the Darwin exhibition).

Another way into the museum is around the corner from the main entrance on Exhibition Road. You ascend through a globular sheet-metal imitation of our Earth via an escalator. See how it glows red hot at its core as you glide through and, at the top, experience one of Japan's most violent earthquakes in a mock-up of a supermarket. Actual CCTV footage is shown from a a dusty-screen television on a shelf. Meanwhile the metal floor rocks and the walls, with all their hanging implements, clatter and clang while the sounds of electricity zap all around you.

A particular classic of the museum is the room which houses a once-living, fully-grown blue whale. The biggest predator in the world hangs by wires, and dominates the entire space - it takes about a minute and a half to walk the length of it. There are tonnes of other animals, either strung up on display, or housed in cabinets around the walls: elephants, mammoths, rhinos, tigers, lions, all the way down to the smaller animals like mice and pigs.

There's so much to see and do at the Natural History Museum, and all for free. You'd be a fool to turn down the chance of a seriously relaxing - but at the same time enriching - stroll around one of London's most iconic (and visually stunning) buildings.

Prices: Admission is free, although the museum does host exhibitions which there may be a small charge for.

Location: South of Kensington Gardens, right around the corner from the Science Museum