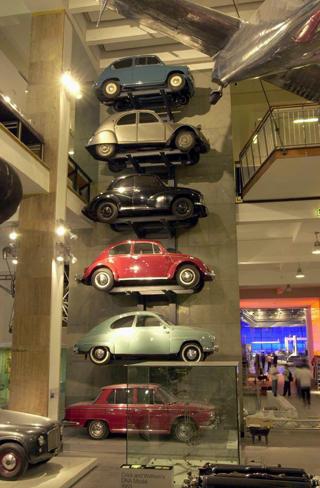 The Science Museum often goes hand-in-hand with its nearby neighbour, the Natural History Museum. They're literally around the corner from each other and, although they display vastly differing objects and ideas, they're inextricably linked. It wouldn't be uncommon to hit them both in the same day, but you'd have to speed around them both or miss potentially interesting things to do so.

And you wouldn't want to miss much of what the Science Museum has to give. As soon as you enter, you're transported back through history to when the first steam-powered vehicles were being used. Going right back to the 1750s, wander through to the present day and observe how modernisation shaped the vehicle industry.

Continue on through the space, telecommunications and computing galleries; here you can see a chronological order of computer games consoles including the classic Game Boy, Sega Megadrive, and Super Nintendo Entertainment System (SNES). For true gaming fans, you can even play a game of Pong with a friend.

Other galleries include The Secret Life of the Home where all our ordinary household implements are on display for your consideration. We take so much for granted these days, so come and see how hoovers, CD players and microwaves are made, and how locks and burglar alarms work.

There is one definite stand out area in the Science Museum where kids can run absolute riot: Launchpad. It's been around for decades, but has recently been moved about within the museum, as well as having a significant make-over. It's the playground of the museum, the interactive bit. Pull knobs, push buttons, turn dials, switch levers - the choice of action, reaction and response all in the name of scientific experimentation mixed with healthy doses of fun is vast in the Launchpad - best save this area till last.

A massive hit with kids of both sexes, adults (small families and couples alike) the Science Museum is an all-day session of exploration in a knowledge-rich environment. Its atmosphere is relaxing and you can make your way around at your own pace. All this for free makes it the ideal spot for a day out.

Prices: Admission is free, although there are charges for the IMAX (from £8) 4D Cinema (from £4), simulators and some exhibitions.