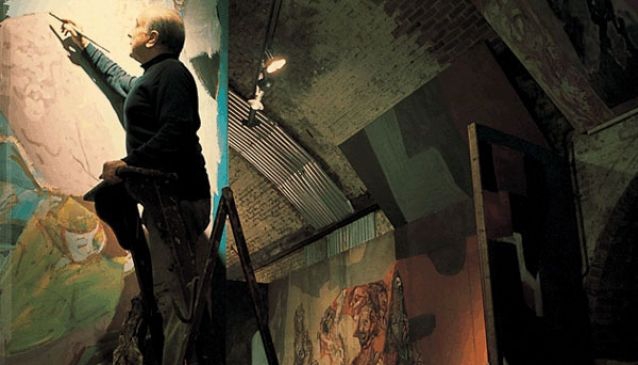 Situated under the Hungerford Bridge near Waterloo Station in SE1, a set of murals and portraits drawn by Polish artist Feliks Topolski gives visitors a first glimpse into the artistic talent of this contemporary graphic artist. At the outbreak of the Second World War, Topolski was in London and during the next few years spent much of his time drawing and documenting the effects of the Blitz on the city. Topolski was given the rank of Lieutenant which helped him gain access to frontline areas, and enabled him to work more like a war photographer than an artist.

The permanent exhibition is arranged across two complete railway arches and follows Feliks' personal record of the many important events and figures of the 20th century in a labyrinthe-style installation- the proportions of which are six-hundred feet long and twelve to twenty feet high.

One of the most telling parts of the display relate to how he saw and was involved in London life in the 'swinging sixties'. Much of this was based on his experiences at a party hosted by Topolski and a Parisian, Philippe Pierre, whom he met at the Roundhouse venue in Camden. They invited some of the most well- known musicians and celebrities of the era. Some of the individuals who can be identified in the pictures are Mick Jagger, Michael Hollingshead, an early experimenter with LSD, Churchill's granddaughter Arabella who helped set up the Glastonbury Festival, Nick Turner, whose band Hawkwind played at the party and Jim Anderson, editor of Oz magazine.