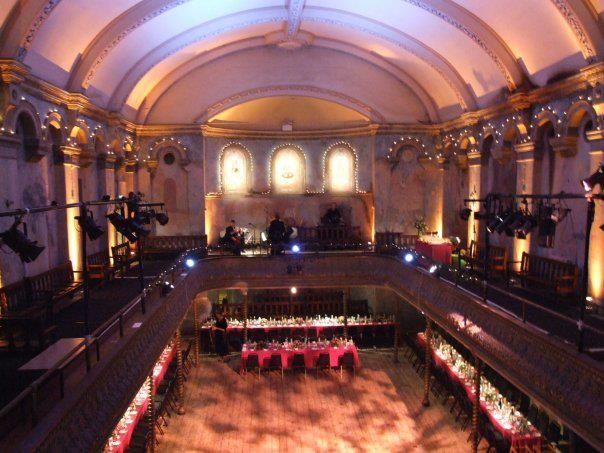 Behind a curtain of faded paint and crumbling walls lies a creative realm of old world art and creative dramatics. Wilton’s Music Hall is the oldest of its kind in Britain, making it of great architectural and archeological importance. Found in London’s East End, the hall showcases new talent in inventive and interesting performances that exude innovative flair and individuality.

Not only is Wilton’s a space for theatrics, but the mid-19th century music hall is also attached to an 18th century three-housed terrace and a pub. Believed to have once been used by Scandinavian sea captains and wealthy local merchants, the old alehouse was then transformed into ‘The Mahogany Bar’ when the 1826 landlord was the first to use a mahogany bar and furnishes. In 1893 a concert room was built behind the pub, earning it the name of ‘The Albion Saloon’, where full-length plays were put on.

In circa 1850, John Wilton bought the business, turning it into the ‘Magnificent New Music Hall’ by enlarging the original concert room. Wilton put on operas, ballets and other fashionable pieces in the new and improved halls. Furnished with elegant chandeliers, the finest heating and innovative ventilation systems, the hall was a hit.

In the late 19th century, London’s East End was pretty grim, earning a reputation of poverty and filth. In a bid to help, religious organisations stepped in and in 1888, the music hall was bought by the East London Methodist Mission and renamed ‘The Mahogany Bar Mission’. The hall was used as a soup kitchen for the needy during the Great Dock Strike of 1889, helping deprived families and feeding thousands. The hall stayed open for nearly 70 years, through thick and thin, surviving even the most pressing situations (like the blitz) and offering support to those in need.

Named as a grade 2* listed building in 1971, the hall was reopened in 1997 as a theatre and concert hall. Now, with the help and generosity of the SITA Trust, the hall is in the process of raising money to complete the second and third phases of the Wilton’s Capital Project.

To support the cause, you buy a ticket to visit the hall and re-live its wonder years through art and drama. There are performances and talks as well as tours of the old building.