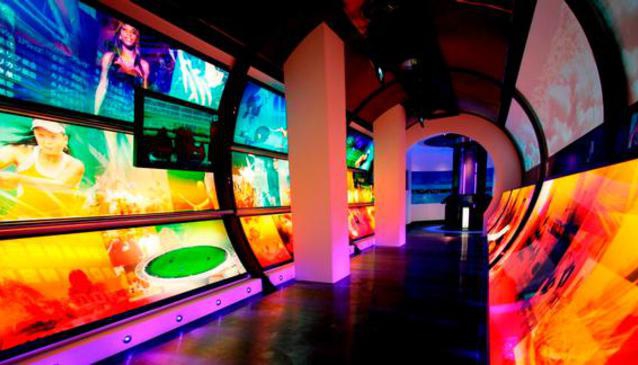 The Wimbledon Lawn Tennis Museum is aptly situated in leafy, residential Wimbledon in southwest London. As perhaps the most famous and hallowed event in the tennis world calendar, the yearly Wimbledon championship sparks off thoughts of strawberries and cream, John McEnroe’s outbursts, and crisp white tennis uniforms set against lush green grass.

However, at this museum - the largest of its kind in the world - the image of lawn tennis as an old, very much English institution is being changed. Here visitors are transported to days gone by in stiff tennis uniforms and 'ancient' technology and to the new, in the ‘Whites of Wimbledon’ display - from wooden racquets and ladies’ long skirts to ultra- slick, technologically advanced tennis equipment and footwear. Every year the fashions sported by the best players in the world are either loved or hated, and the Museum aims to show outfits worn in the 1880s alongside super-light, barely there attire.

As well as finding your own way around the museum, there are daily tours available which are headed up by qualified Blue Badge guides. Tours are sixty minutes, and visitors gain exclusive access to iconic areas such as seeing London from the top of 'Henman Hill' (or 'Murray Mound', depending on the UK's current tennis star...), Court No.1, and the BBC studio where post-match interviews take place. Also, in anticipation of the Olympics this summer, two gold medals courtesy of Rafael Nadal and Roger Federer - which were won at the 2008 Beijing Olumpics - have been donated to the museum which are available to observe in all their golden glory. Together with this, memorabilia from past Olympic occasions are features, to get all sports fans in the mood for London 2012.

It is a very interactive place to be absorbed in tennis-mania. The ‘Get a Grip’ exhibition which is a rotating wheel of rackets and the 'The Reactor' game can be enjoyed by visitors of any age. There is also a 200° screen that immerses the viewer in the experience of playing on the Centre Court alongside the greats. Using special filming techniques, the film focuses on 20 different aspects of the match and shows viewers how players' bodies and equipment are affected during the course of a professional game.

But one of the favourites at the Museum has to be the sightings of McEnroe's ‘ghost’. Walk through a 1980s replica men's changing room and see John McEnroe projected in 3D, appearing almost as a solid form. Visitors can get up close and personal with the self–proclaimed bad boy of tennis in one of the most unique exhibits dedicated to the sport. Hopefully he doesn’t throw any tantrums during your visit!

Opening times: Monday - Sunday: 10:00 - 17:00 Please Note the following opening and closure schedule for Wimbledon Lawn Tennis Museum in 2012: The Museum and tours will run as usual up to the 17th June 2012. Beginning the 18th - 23rd June the Museum only will be open with no Centre Court viewing. We will be closed on the 24th June.

On the 25th June to 8th July the Museum will be open for tournament ticket holders only.

From the 9th to the 27th July Wimbledon Lawn Tennis Museum will be closed for the Olympic setup.

The Museum will only be open to Olympic ticket holders from 28th July to 5th August.

Then until the 14th August the Museum will remain closed due to Olympic breakdown.