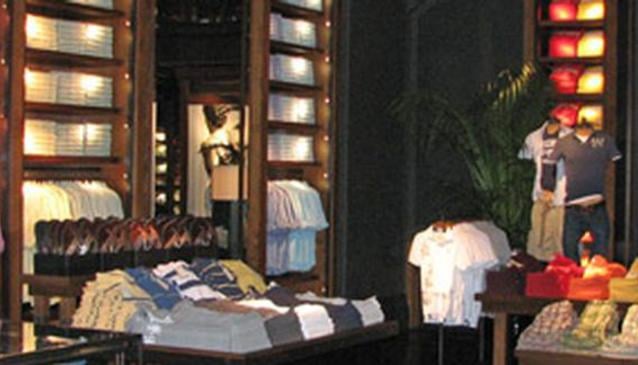 The only UK branch of Abercrombie & Fitch is located in London’s fashionable West End. The famous US fashion retailer sells casual clothes for men and women, including polo shirts, cargo pants, bags, shorts, low-slung jeans, fleeces, t-shirts, belts, skirts, knitwear and flip-flops. Men’s clothes are upstairs and women’s downstairs, and both floors are filled with banging dance music that make the place feel like nightclub as well as a clothes shop.

This nightclub feel is added to by the models who parade the Abercrombie shop floor rather than shop assistants, and it may very well be them rather than the prices that bring in the customers. They’ve been know to dance with one another and often walk around topless (the men that is!). As an added incentive they are always open to having their picture taken, posing either with or without customers.

Once you get past the rippled muscles and toned abs you realise that £70 for a shirt and £60 for a polo shirt isn’t exactly cheap, but then an Abercrombie & Fitch logo may well be worth every penny for the fashion-conscious London shopper. And it’s still cheaper than buying online as delivery there starts at £20.

If that’s not enough, the wooden décor is also worth a look, while the shelves stacked to the ceiling give the place a different feeling to your average clothes store, something Abercrombie & Fitch certainly isn’t. A five minute walk from Piccadilly Circus or Green Park tube, Abercrombie & Fitch is also close to other fashion shops such as Massimo Dutti, Sam Greenberg and the tailors of Saville Row.