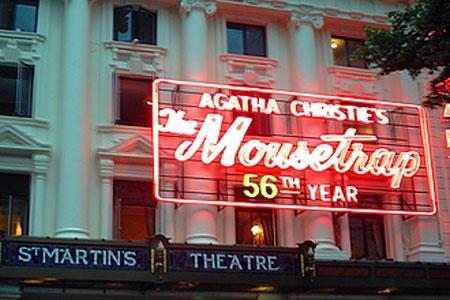 Let's not ruin this - there is a twist at the end of The Mousetrap that is legendary for its, well, nobody really knows. At least not those that have never seen it, for the performers of The Mousetrap implore each and every audience to never reveal the ending to those who haven't seen it...meaning reviewers too have a duty to keep equally quiet.

What we can reveal is that The Mousetrap is the longest-running show in the modern era. Having opened in London's West End in 1952, it has been continuously running since then, clocking up more than 23,000 performances so far. Obviously, the cast members have changed, but the delightful murder-mystery plot line has remained, augmented by the passing of time and the modern day phenomenon for nostalgia.

Written by Agatha Christie in 1947, The Mousetrap was originally called Three Blind Mice and was a radio play, but changed its name on the eve of WWII. It actually premiered at the Theatre Royal in Nottingham before settling London's West End and enthralling audiences with its classic tale of murder, mystery and stranded characters in a large country house.