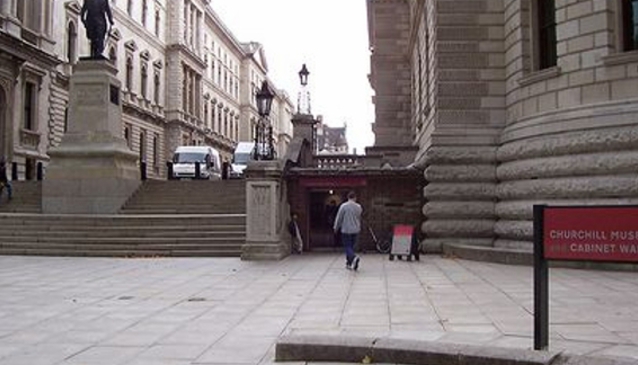 Imagine if, instead of having a high-rise tower block or a two story studio suit as your office, you were confined to an underground shelter. Imagine your daily soundtrack wasn't the tapping of keys on a keyboard or birds in the park, but instead it was a barrage of wall-shaking bombs, deafening sirens and, from your workmates, frantically-yelled orders instead of polite requests for a fresh brew.

Such was the routine for our wartime Prime Minister, Winston Churchill. Beneath the streets of the City of Westminster, Churchill and his war cabinet would convene while, above their heads, war savaged our city. Indeed, Churchill was noted to have said that he'd control the war from the rooms themselves - and you're invited down to see them.

There are three main sections to this attraction: The Cabinet War Rooms, the Churchill Museum and Life in Churchill's Bunker. In the War Rooms you can see the wall-mounted strategic maps, the table around which the Prime Minister and his Cabinet would sit, communications rooms and even Churchill's private kitchen.

The Churchill Museum is where you can really unfold the man behind the ever-cigar-sucking face thanks to up-to-the-minute technology. Listen to some of his most rousing speeches like the 'We'll fight them on the beaches' one in particular. There's also a lengthy timeline in the museum with which you can interact. It documents every year of Churchill's life, giving you a huge insight into the man's career and personal affairs.

The 'Churchill Bunker' experience uses audio and visual technology to deliver just how it felt working alongside the great man from the point of view of his personal secretary, for one. It adds to the rest of the experience, allowing you to delve into some rich British military history that will definitely live long in the memory.