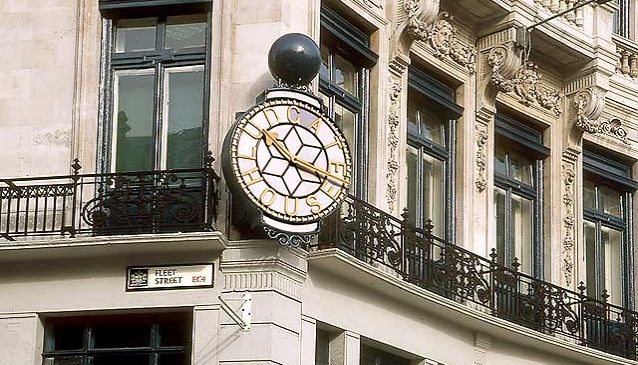 Renowned as the home of the daily newspaper, Fleet Street in the affluent and historic City area of London is legendary for its influence on the media, and for some of its more peculiar residents.

Fleet Street gets its name from the now hidden River Fleet , which apparently still gurgles under the road, albeit much cleaner than it used to be. This road was a vital transport hub, and in 1500 the first printing press was set up behind St Bride's Church.

It was really only after World War 2 that Fleet Street became more popular as a newspaper producer's haven. Even though now most of the big media names have moved out of the street, they have still left behind remarkably unique art deco buildings including the Reuters and Daily Telegraph offices- true examples of the heyday of print journalism. The area is also famous for its conglomeration of law courts and offices, including the Royal Courts of Justice.

Another famous resident of Fleet Street, for entirely different reasons though, is Sweeney Todd (better known as the Demon Barber), who lived at No.186, who sold his victims to a nearby pie shop. Although this is reputed to be a true story, many people believe it is, well, porky pies. In any case, it certainly adds extra flavour to the area.

Fleet Street is also well- known for its drinking establishments- some like the cavernous Ye Olde Cheshire Cheese used to be the drinking hole frequented by Dickens and Yeats, as well as journalists and aspiring writers. It seems that literary types have always found liquid refreshment appealing!

Meandering down this street is a great sightseeing opportunity, and it can easily be added to your London itinerary as part of a walking tour on your way to St Paul's Cathedral or Trafalgar Square.