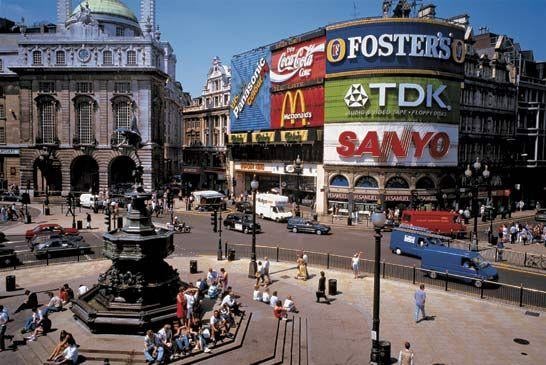 One of the most vibrant and populated areas of London’s theatrical West End, Picadilly Circus is generally known for its bright neon lights, circle of intersecting roads, frenzied traffic and proximity to major shopping and entertainment areas. It is a famous meeting place for tourists and Londoners alike (although few Londoners will admit to this!) Together with Big Ben and Trafalgar Square, this is typical buzzing, lively London, and the area definitely looks its best at night, for obvious reasons.

Historically, the area known as Piccadilly had early links to a tailor named Robert Baker who sold piccadills, a type of collar, in the early 1600s. Piccadilly Circus itself was created in 1819, and the circus lost its circular form in 1886 with the construction of diagonal Shaftesbury Avenue, named after philanthropist and social reformer Lord Shaftesbury. In fact, the Circus also has a well- known statue called the Angel of Christian Charity (usually mistaken for Eros) dedicated to this man, although it was laughed at for being an eyesore when it was first unveiled in 1893.

The first electric adverts at Picadilly Circus appeared in 1910, with the most recent examples of LED company branding including Samsung, MacDonalds and a scrolling Sky News update. However, the number of adverts has decreased in recent years due to the high price of rental space. On special occasions in the past, such as the death of Princess Diana, the the lights are even turned off completely for a short period as a sign of respect.

Piccadilly Circus is ideally situated in central London as it is surrounded by several major tourist attractions, and retail stores. Neighbouring areas such as Soho offer visitors the opportunity to experience more alternative and even bohemian aspects of London life.