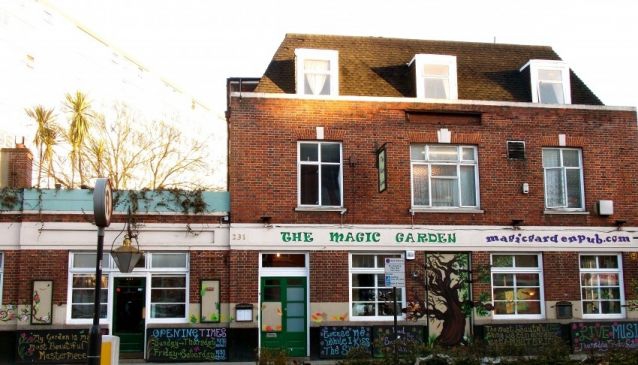 Originally named the Secret Garden, the pub changed its name to avoid confusion between itself and an artistic festival involving a lake, a big wooden ship, and flaming spears. Still drawing in the same cool, equally artistic, and consistently attractive crowds, the Magic Garden isn't just another one of London's awesome pubs, it's a power-house of a music venue. Albeit smaller than, say, the Shepherd's Bush Empire, the Apollo, or the O2, this apparent minnow effortlessly mixes it up with the bigger of London's fish - you only have to see their line-up list to know that.

However, the Magic Garden does showcase all the other hallmarks of a great London pub, not to mention its array of food menus. For just a tenner each, the BBQ menu offers burgers, kebabs, hot dogs and salads for those sizzling summer afternoons. The lunch and dinner menus are a similar price with good, hearty English fare up for the taking so, why not find a cosy spot out in the pub's glorious beer garden out back. Festooned with model butterflies, fairy lights, hugely comfortable furniture and exotic plant life, this secluded garden is a real surprise as you'd think, from the front, it would never exist.