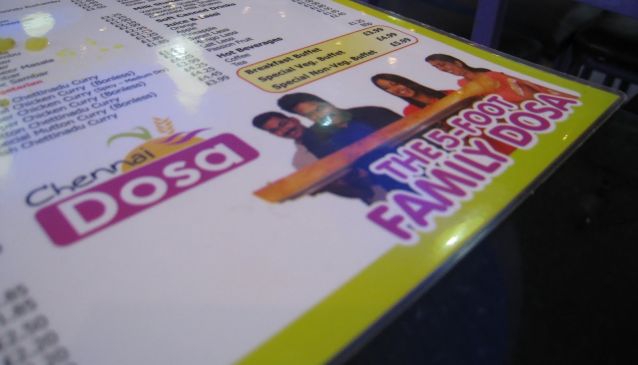 What's in a name?

For those of you completely boggled by the two words 'Chennai' and 'Dosa', allow us to explain. Chennai is the new name given to the southeastern Indian capital city of Tamil Nadu. It was formerly known as Madras, and where we get those fiery currys from. Dosa is, simply, a very delicate pancake, and a hugely popular staple in southeast India as well as neighbouring Sri Lanka.

Seconds down the road from Tooting Bec tube stop (reached using the Northern Line), Chennai Dosa is one of several London-based eateries to emerge. The service is as prompt as the prices are low - you won't spend more than £15 each for your belly to be stuffed. Chennai Dosa is perfect for casual diners in groups.

The whole menu is full of exotic staples. The savory cakes of fermented lentils and rice (idli) come with selections of sauces and chilli dips, while there's a host of different gravies, tandoori breads (garlic, chilli, butter, stuffed). The dosas themselves obviously play a big role on the menu, including the biggest of all - a staggering 6ft 'Family Dosa' which may as well serve as an extra table cloth. Fillings for this mammoth beast - or regular dosas - are veritable with hot chutneys, onion masalas or green dosas where they are stuffed with fresh veggies and chutney. There's even more choice with the Tiffin - essentially an 'afternoon tea' concoction including a range of otherwise 'off-the-menu' selections such as idli.

In all, Chennai Dosa will give you your fix of lentils, rice and pulses (although some branches do serve meats), along with wide selections of exotic sauces, chutneys and other fillings. It's a real treat here and it's gentle on the purse strings - perfect for an afternoon light lunch.