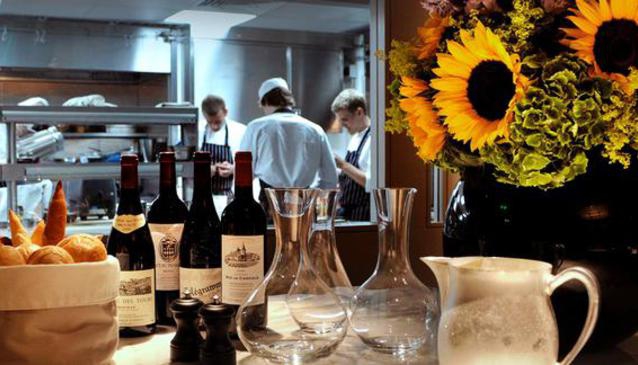 Bruno Loubet, Marco Pierre White, Tom Aikens, Gordon Ramsay. All of these world-famous chefs have one thing in common other than their shared profession and city of operation – namely, they all worked under chef Pierre Koffmann at his three-Michelin starred restaurant La Tante Claire during their formative stages. One of London’s first three-star chefs and variously described as one of the most gifted chefs of his generation, it’s been rumoured that Koffmann opened his eponymous restaurant in the Berkeley Hotel after the overwhelming response to his pop-up restaurant at Selfridges only a few months earlier.

The menu is a throwback to the chef’s homeland of Gascony in Southwest France, and though you’d be led to believe that it would be a relative informal affair by the romantically nostalgic association, a meal at Koffmann’s is still very much a formal occasion. The basement dining room is decorated in muted shades of olive green and magnolia, while sunflowers burst from snugly arranged vases on countertops. Like a band’s reunion tour, the menu offers a selection of the chef’s greatest hits alongside reinvented classics. Meat is the order of the day here, and Koffmann makes no apology for taking humble cuts of meat like tongue and veal kidneys and transforming them into works of edible art; in fact, his most famous dish, and probably the most famous of any London chef’s signature dishes of the past few decades, is a roasted pig’s trotter stuffed with a creamy chicken mousse and morels.

That isn’t to say that there aren’t more familiar dishes on the menu. A USDA beef entreCôte comes with a delicious black pepper sauce, while a whole roast seabass is accompanied by a moreish lemon confit and tender root vegetables. The kitchen makes the most of its produce, and the chips and roast potatoes here are legendary, with many visits proclaiming the humble spud the best morsel, side dish or otherwise.