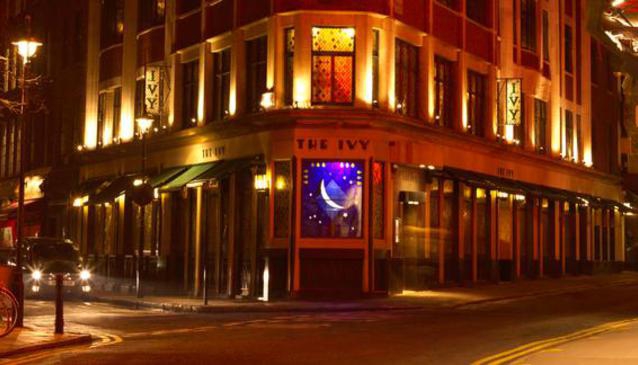 The Ivy restaurant one of the most important post-theatre restaurants in the history of London. Established in 1917, The Ivy has proven itself to be bullet proof many times throughout the decades. Redevelopments, many changes within the staff (obviously) and crises has not damaged the good reputation of the restaurant. Several celebrities have been spotted and photographed upon exiting The Ivy. It is open late at night and, with the Royal Opera House and Coliseum is nearby, it makes for the perfect place for a post-theater meal.

The Ivy is revered as one of the classiest places in town, and has had that status for as long as it's been around. It's got cross-hatch stained glass windows, adding to that sense of homeliness but contrasting with the elegance of the circular-backed, curly-legged chairs, the intricate light fixtures, the big blocky marble pillars, not to mention the spectacular wall carvings and patterns. The Ivy mediates an atmosphere of 1920s glamour combined with the conveniences of the 21st century. A bold concept executed intelligently and without a sense of pretense.

As well as being a popular hit with celebrities, The Ivy's menu will do nothing short of exciting and fulfilling its readers. With fish, roasts and grill dishes as well as vegetarian and vegan options available and dishes such as the fillet of organic sea trout; pan-fried calf's liver and dried-cured bacon; or spinach and ricotta ravioli served with pomarola and pesto made with fresh and selected ingredients, it's not hard to see how. The Ivy serves exquisite wine from the Old and New World by the bottle to complement your meal. The restaurant further offers weekly specials as well as a set menu for private parties.