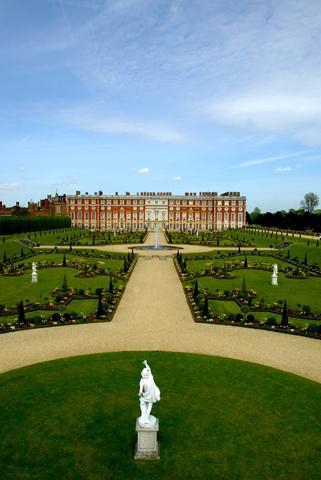 Depending on how you look at it, Hampton Court Palace just may be one of the most happening places in London - literally. With a packed calendar of events unfolding at the palace, the Palace plays host to a massive variety of things.

Which ones? In the summer, the palace hosts its famous annual Flower Show in July and in June holds a wonderful summer Hampton Court Festival, inviting the public to lounge in its perfectly manicured and gorgeously opulent grounds to the sounds of a series of performances and concerts - this year sees Katie Melua, Frankie Valli and the Four Seasons, James Morrison and Squeeze taking up the mantle. Winter is also very busy too, with Ghost Tours taking place within the palace and grounds and a magical ice rink set up in the grounds - certainly worth a detour from the usual Central London circuit. Finally, May sees in the palace's Food Festival, with live demonstrations and masterclasses from Michelin-starred chefs taking place in the palace and its gardens.

A Vibrant Past and Present

Let's backtrack a little. The palace itself is actually two palaces being billed as one - who said London wasn't value for money? The original was built by Henry VIII for his close associate, Cardinal Wolsey, in a traditional Tudor style. When the Cardinal fell from favour, Henry reacquired it and extended, where it remained until King William III commissioned Christopher Wren to erect a stunning Baroque extension, transforming the South and East facades of Hampton Court.

The palace itself is beautifully designed and wonderful to look at, as are the gardens. Containing 60-odd acres of garden set within the wider grounds of some 750 acres, they include the recently restored Privy Garden and the palace's famous trapezoidal maze, the oldest surviving hedge maze still in use. The gardens are the perfect setting for an idle and leisurely spring or summer afternoon, as aside from the main highlights there are a multitude of beautifully landscaped and designed features to amble through and gaze upon.

Finally, the palace is home to a fine and restored fully-functioning Tudor kitchen that prepares Tudor meals to this day - a somewhat unmissable experience for the casual enthusiast, historian or food lover.

Logistically, the easiest way to get to the palace is by rail - Hampton Court station is the nearest station, and trains run from Waterloo, though it's perfectly possible to jump on the same train from Wimbledon or Clapham Junction if more convenient.