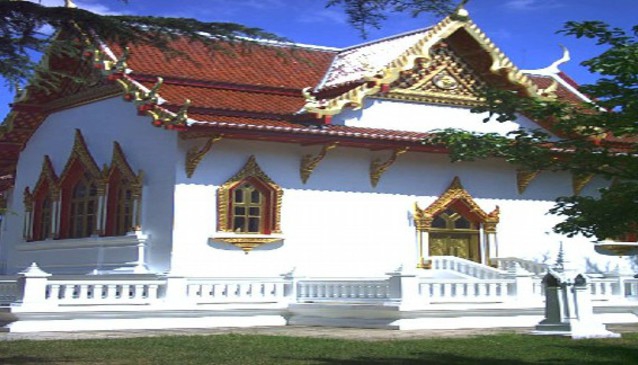 Not the typical touristy place to visit, especially as it is in leafy Wimbledon, south-west London. Nevertheless, this temple is an authentic Thai place of worship. It is quite a new addition to the Wimbledon landscape, only having been built in 1982 by an association of young Buddhists. It was the first Buddhist temple in the UK, and was meant to encourage further Buddhist teachings throughout Europe.

It has since become one of Europe's most important Buddhist training centres. In 1986, when the British Museum organized an exhibition on this faith, a London newspaper even commented that a visit to the museum and to the temple would be enough to gain a good understanding of Buddhism, and its principles.

The grounds of the Temple cover approximately four acres in which the Uposatha Hall is situated on an ornamental lake, and surrounded by a small grove, flower garden and an orchard. The Temple consists of the House where the monks live and a cottage. On the ground floor of the House there is a Shrine room, a library and reading rooms. The rest of the house is the home for the monks.

As one would expect from many places of worship, the walls of many parts of this temple have been ornately decorated and painted to represent many important aspects of Buddhist life and philosophy. There is an especially impressive series of murals depicting the life of Buddha, painted by volunteers from Thailand.

Although this temple is another of London's free sites, please note that during the week you can visit the temple ground and come at the weekend for the glimpse into the main temple.