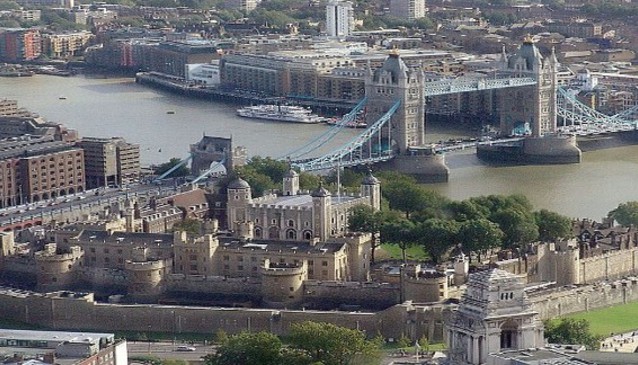 Tower of London and Tower Bridge

These are all words associated with this UK World Heritage site in London's Tower Hill area. It is also usually associated with Tower Bridge, one the most recognisable and impressive suspension bridges, which is still in use, in the world.

Building work on the Tower of London's White Tower began in the late 1100s, after the Norman William the Conqueror invaded England and took power and the crown in 1066. The Tower of London was generally not intended to be a place where royalty lived, but rather serve as a fortress, and later a prison, against invaders or challengers to the throne. The White Tower is also the site associated with the murder of two imprisoned princes- the skeletons of whom were found later.

By 1350, we start to see the Tower and all of its parts as it now stands. Over the centuries, the Tower of London has been the home of lions, boy kings, prisoners, religious outlaws, a host of (in)famous kings and queens and a large amount of wealth. Unfortunately, many of the men and women associated with the Tower lost their head. Literally.

During King Henry VIII's rule, after he broke ties with Catholic Rome, 2 of his wives were beheaded, as well as a host of celebrity prisoners. For about 100 years, the Tower served as a bloody prison and thereafter became the home of the Crown Jewels, and a political and administrative building.

In the 20th and 21st centuries, especially during the World Wars, the Tower returned to its status as a prison and held some Nazi spies. It was also quite badly damaged during the bombings of London during the Second World War.

Highlights of trips here include the Crown Jewels, a visit to the White Tower and a walk along the battlements. You can even see rare armour, and possibly one of the many ghosts said to wander and haunt the Tower, and its staff. The Ceremony of the Keys is a daily event where the Tower is shut to lock in the Crown Jewels, but does need to be booked well in advance. The close proximity of the Tower to Tower Bridge allows you to visit the Tower Bridge exhibition, as well as both sides of the River Thames.