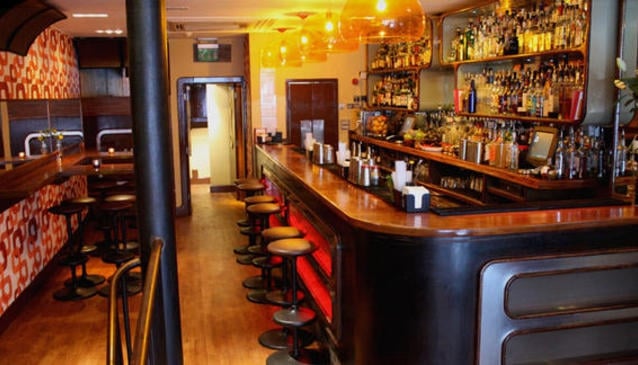 LAB, standing for the London Academy of Bartenders, was initially set up to be a boot camp for budding barkeeps. It began in the mid 1990s and had the goal of becoming London's flag-flier in the cocktail industry. Today, it's exactly that. It leads the way from its base in Soho and attracts crowds in their hundreds week in, week out.

Such is its popularity, thanks to the decade-plus of existence, the menu at LAB is humongous. It claims to be one of the most extensive cocktail menus in the UK; not exactly a surprise, when you think about it. Including old favourites and modern classics, as well as page after page of their own concoctions, the creative geniuses at LAB keep their guests constantly guessing thanks to the menu's diversity.

But they don't just specialise in cocktails at LAB (although that is their main pull). They have a strong Japanese food menu offering sushi and sashimi, noodle dishes like the deliciously popular yaki soba, and the rice-heavy options of teriyaki: either beef, salmon, or chicken. They're reasonably cheap, too. You won't be spending more than a tenner for a meal here; it's the cocktails that empty your pockets.

Finally, adding yet more dimensions to their repertoire, LAB puts on DJ sets from Thursdays - Saturdays. DJ Jason, Andy Galea, and DJ Felix get the crowd into a spin for the end of the week and into the weekend with the biggest dance hits. They're all hugely experienced guys who have spun sets around the world, and nightclubs around London like Pacha and Fabric.