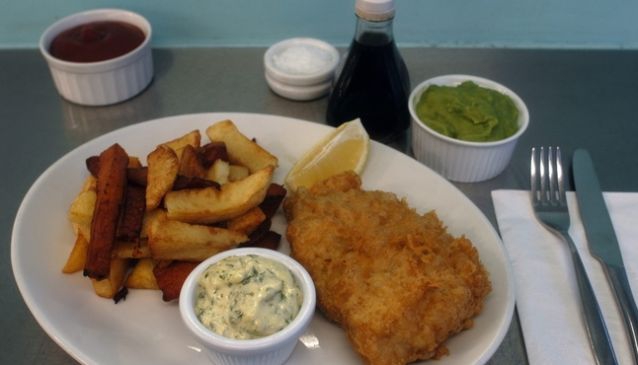 The phrases 'posh fish' and an 'upmarket fish 'n' chip shop' are bandied around when this place is put on the table - the place even gives itself such a status. Granted, the food it produces and puts before you after you've sat down fills a hole in your stomach, but things are evened out when you settle things up; another hole appears - in your pocket.

We don't want to labour the point of Fish Club's prices because the place itself is wonderful and the service is as pleasant as the interior; several species of freshly caught fish are displayed on ice on top of the open-plan counter, and a stream quietly makes its way through the premises. It's sealed under glass for safety reasons, of course. The staff are about as chilled as the iced fish and they're knowledgeable, which helps. In all, Fish Club's vibe is mellow and unhurried, allowing you to really enjoy your meal without feeling like you're being shunned out of the door before you've even tucked in your napkin.

They definitely love their variations at the Fish Club. What we mean is, for example, their potatoes come in all sorts of forms: mashed, new potatoes, sweet potato chips and regular chips (the two varieties can come mixed together if you like). The same goes for the sauces: black bean, tartar, mayo (arguably better than ketchup for dipping chips in), sweet chilli and aioli which is like mayo but its taste can be varied with the addition of mustard, for example. Otherwise it's business as usual with a plethora of fishy fishes including oysters to start with, or a crayfish cocktail, or even a half pint of prawns. For mains, the prawn and chorizo kebab explode with textures and tastes: the spiced sausages together with the cooling prawns really tickle every taste section of the tongue. Meanwhile the grilled or battered coley/haddock make way for huge flavour and meaty mouthfuls and the skate is succulent. There are salads plates up for grabs too with Caesar, Greek, or rocket and Parmesan - among others - all for well under a fiver.

Fish Club, as less of a restaurant and more of a cafe, prides itself on posh nibbles and that's exactly what you'll receive. Head down there with a friend or in a group for a really fantastic fish meal.