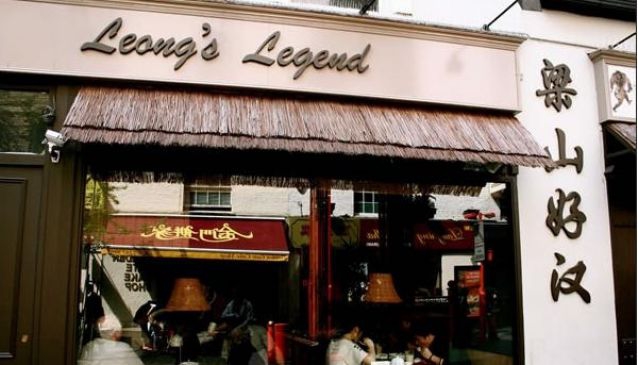 The Legend of Leong

Quite who this 'legend' is will become clear in a matter of seconds: there were actually hundreds of them. The name 'Leong's Legend' is a spin off from a Chinese novel in which a gang of rebels, called 'Liang's Legends', strive to take down a corrupt government while having to seek shelter on Mount Liang. The name became manipulated to what it is today, and it's now a well-known establishment in a proper foodie part of London's Chinatown.

Probably not its entry system. By that we mean its front door. It'll be locked when you get there, but don't panic, just knock - loudly if you want to be heard - and they'll let you in. It's a little quirk they've come up with which seems to keep the hordes away. Leong's prices, however, its appeal, its reputation - all of those plus more are what make it legendary. From the menu there's garlic and chive dumplings, freshly crimped and still steaming which come served in moist bamboo baskets and are ripe for the plucking. Leong's dumplings stack up splendidly against traditional fare and, incidentally, Leong's is London's first Chinese/Taiwanese restaurant to pop up in Chinatown - it's a real old original. The beef soup comes with strings of noodles swimming for their lives and a pair of chopsticks for authenticity, while you can (and should) also try the wonton in spicy sauce. Wontons are a little like regular dumplings, except the texture of the pastry is slightly different.

This is definitely a super place for some casual and alternative dining. Between two, you're looking at no more than £30 in total which, these days, is nothing short of daylight robbery. They'll serve you with a smile, though, and you'll leave with one so everyone stays happy.