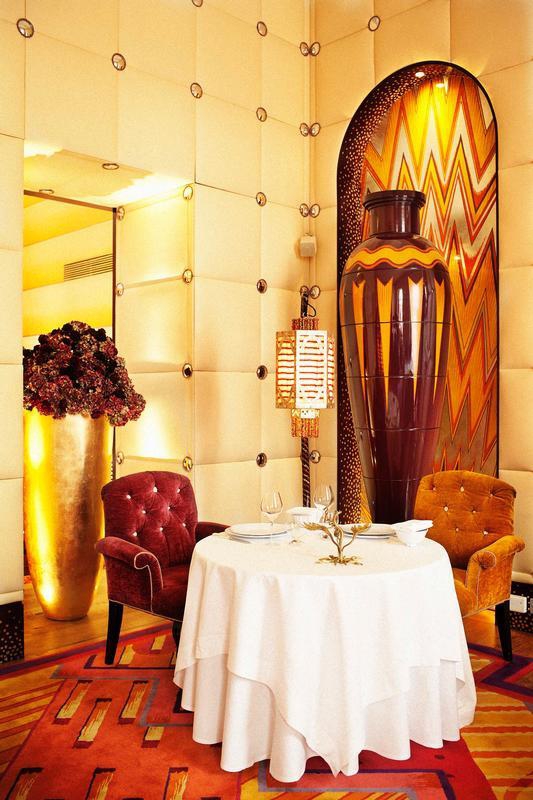 Split into multiple sections – a parlour, a brasserie, a haute cuisine lecture room – the restaurant wears its beauty and extravagance on its sleeve, and cannot fail to impress all but the most jaded of individuals. The Michelin-starred Lecture Room and Library features an interior with a colourful modern Maghrebi (North African) design, while the Parlour’s interior has recently been revamped by the artist Martin Creed into a warped design of geometric patterns and shapes.

Menus, as befitting such a glamorously high-flying establishment, are nothing short of spectacular. Designed by three-star chef-patron Pierre Gagnaire, the cooking is nothing short of perfection and the food by turns has the power to excite, delight and astound. This is coming from a man who has been variously described as innovative as Blumenthal and Adria, and as decorated as gastronomic heavyweights like Ducasse and Robuchon. Think unfamiliar yet thrilling combinations – think foie gras terrine accompanied by ginger-tinged oysters, or langoustines with a citrus gelée and avocado.

The a la carte is, frankly, almost completely prohibitively expensive – starters average £40 – but the tasting menus are a realistic proposition, and the rapide lunch a relative bargain at £30. Still, for an experience likely matched only by a handful of other places on the globe, you could pay far more – and you’re getting dinner out of it as well.