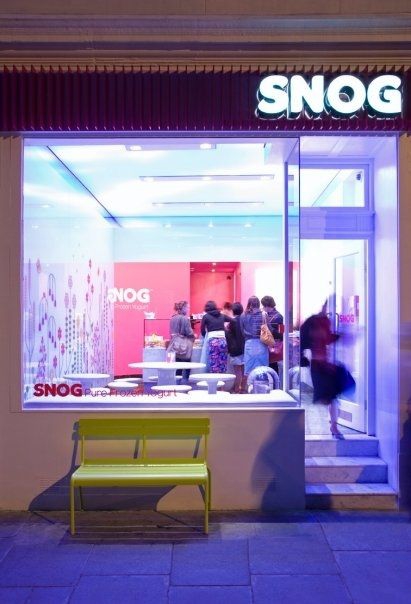 Snog is a futuristic, funky, fun explosion of flavour. Situated in trendy South Kensington, Snog is dedicated to producing frozen yogurt that is packed full of taste, but unbelievably low in fat.

Despite the surreal, manga design of the parlour's interior, Snog's frozen yogurt is not a product of a factory in Tokyo, but is freshly produced on the premises by skilled staff. At first, the flavour selection may seem curiously limited, but in the world of Snog, it's all about the combinations. Choose from a range of base flavours, such as chocolate, green tea, natural or various fruits, and then literally top it off with an extensive selection of toppings.

Whether you want to balance the low fat of the yogurt with a more indulgent topping, such as chocolate chunk or brownie, or you'd rather further the health benefits with a liberal helping of dried fruit, Snog is sure to have something to suit your needs.

In order to produce such a delicious treat that is 0% fat, the yogurt is sweetened using Agave Nectar rather than sugar, which is also available as a hot topping, along with peanut butter, caramel and espresso. The Snog philosophy is simple: a product that tastes amazing, but is still exceptionally good for you; as the website promises, 'you will never forget your first Snog'.

Snog also has branches in these locations: