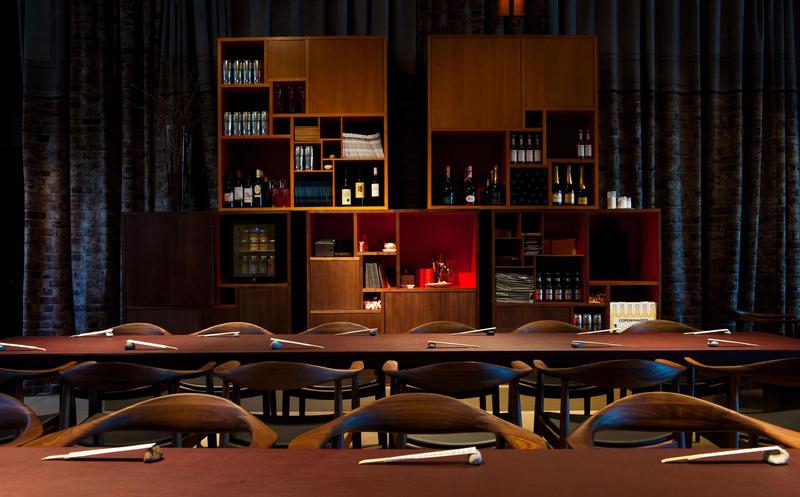 Of all the cool weapons in this slick Wimbledon joint's arsenal, it's biggest gun is definitely plate presentation and the names of the meals. Man Food, for example, is a line of skewered ham chunks, chicken, beef, chilli chicken, a teriyaki spring roll and a stick of miso-marinated pork. The Bankrupt has a closely bunched selection of inside-out rolls including two tuna, two mamma mia rolls and two smokey rolls with soy, wasabi and ginger flavours throughout to set your mouth a-fizzing.

Presented on plates in varying degrees of intricacy with spirals and diagonal lines leading the way, the colours offered on each plate make them look more like an easel than china crockery.

The interior of Sticks'n'Sushi is a feast for the eyes too. It's very Scandinavian plus an amusing touch of brick-print curtains along one wall. Scandinavian, you say? In a sushi bar, in Wimbledon? That's right. Sticks'n'Sushi has nine of its initial outlets in Denmark, with the Wimbledon branch being its first UK opening.

Seating is really exposed too - a little school cafeteria-esque - with a fistful of long communal tables lining the central floor space. The sushi bar itself is as open as the rest of the plan giving you the pleasure of watching the chefs at work.

Service here is swift and polite and you certainly won't have to worry about busting the bank to cover yourself after you've eaten. Prices here as generous as the place is appealing and, for the higher-class area of Wimbledon, it's definitely worth the trip across town.