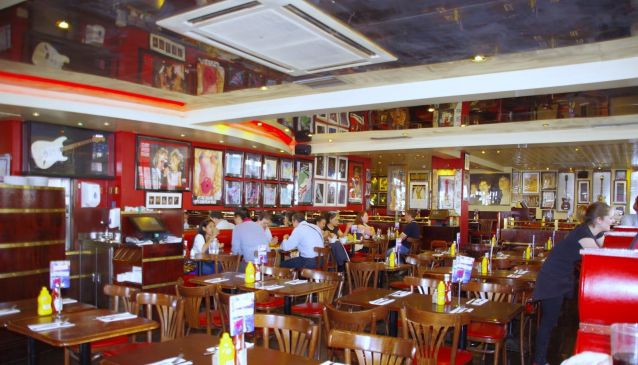 Sticky Fingers was established in 1989 by Rolling Stones member Bill Wyman. He wanted to open a restaurant that was perfectly suited for him, something that screamed rock 'n' roll, just like his front man, Mick Jagger.

When Wyman was thinking about how he wanted his restaurant to look, his thought process might've been something like, how would a restaurant look if America vomited on it? Pretty good, as it turns out. In fact it's unmistakably, and unashamedly, American. A green and red neon sign on the outside, while the inside has all the hallmarks of the classic American restaurant we've come to know and love. Booths, for one thing. Puffed out red leather sofas sitting back-to-back with one another and a table in between each pair; mustard and ketchup on every table for streaking up those hot dogs; and of course, classic American rock music flooding from the wall-mounted speakers across the room.

If you don't come to Sticky Fingers for the traditional American appeal, there're several other reasons. Being a Stones fan helps. You're not going to be able to avoid the unbridled amount of memorabilia that's paraded about the place. If you've ever known a successful musician, you'll know this is what they do, it's just their thing. Original artwork, LPs and original records are all framed, signed and hung generously on the walls. It's a haven for the Rolling Stones, and American culture which, put together in a place like this, is a brilliant combination.

Obviously you'll come here in search of a good meal, and good meal you shall receive. You'd better arrive hungry though, because they don't mess about with portion sizes (adhering to true American style). The burgers have won awards, the ribs are the best in town (apparently); it's even been reported that a lion from London Zoo was given a steak from here but couldn't finish it off such was its size. OK, so that was an exaggeration, but the steaks here are super-chunky and as juicy at wet sponges, the sandwiches and salads will leave you rubbing your belly in satisfaction, and the chicken buckets are more like chicken vats. Everything is served up with hearty helpings of sides like fries, slaw or onion rings, and most of the meats are lacquered in layers of spicy, sweet or BBQ sauce.