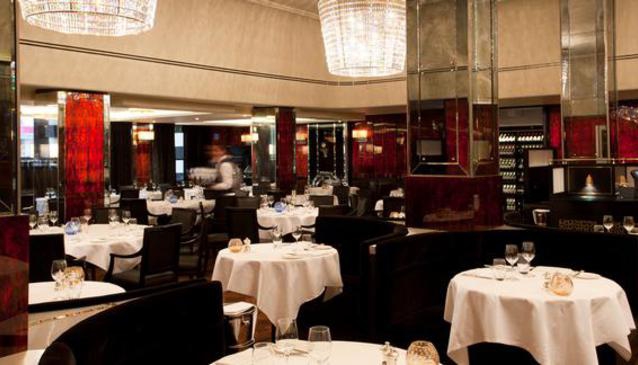 Located within the walls of one of London's finest and most classy venues, The Savoy Hotel, this restaurant is definitely a place in which to see and be seen; it's a hit with modern and historical famous faces.

Ever since 1889, this restaurant and the hotel within which it lies has been classed as one of London's icons for the simple reason of being the first luxury hotel to open in the city. As well as retaining its unreachable standard, The Grill's seating plan has remained the same since it first opened its doors, giving you a more personal sense of history when you sit down. Who knows, you could be sitting where Charlie Chaplin or Sir Winston Churchill sat.

Being on the banks of the Thames, The Savoy Grill is set up for the perfect viewing platform while you enjoy your meal, especially at night when London is illuminated in light.

Being a grill restaurant, meat obviously populates the menu. But it's meat with class, of course. Porterhouse steak, Hardwick lamb, veal platters and calf's liver make appearances. There's also a decent fish selection with oysters, scallops, Dover sole and sea bass all served with with delicious accompaniments. Extravagant roasts such as pork belly, duck breast, and ox cheek are further options. While desserts and afters range from tarts to the creamiest ice-creams and richest cheeses. A children's menu and Sunday roast list are also available.

There's so much to do near The Savoy, making it unwise to be spontaneous when you plan a visit here. Along the river there's the London Eye and London Aquarium, while there's also Covent Garden for those wanting a little retail therapy or, for the art lovers among us, The National Gallery and National Portrait Gallery are close by on Trafalgar Square.